Well plans change. I finished the Lord's Acre quilt that I had planed but hubby just didn't really LIKE it so we went to plan B. Hubby found a quilt called "Walk Around the Block" by Connie kauffman in a Quilters World magazine from 2009 that uses a Jelly Roll and border fabric. He knows how much I love Kansas Troubles fabric so he said just use one of your KT jelly rolls. Well I only had one left that was not a Christmas jelly roll so I just went and cut strips for the quilt from about 30 fabrics from various KT fabric lines so I could control the medium hues a bit more. I have been collecting KT fabric for several years so I had a good stash to use besides pulling fabric from my shop. I really like how the auction quilt turned out. We don't see much of fall here in Texas but I love it and was determined to make a fall quilt. 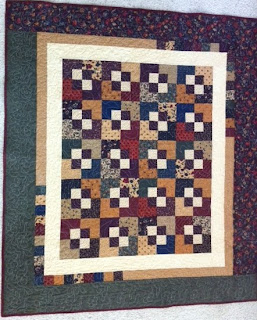 It is time for the annual pilgrimage to Houston for fall quilt market. Lindsey has an Ipad now and hopefully will be updating the blog to show you what beautiful finds there are for the coming year. We get so overwhelmed and excited with all the new gadgets and fabric that appear every year. I am wrapping up projects in the shop before we leave and am hopping to get my Lord's Acre quilt on the quilting frame before we leave. I am currently ripping out the border which just was not saying anything but "ugh" to me. Sometimes no border is better than an ugh border. I guess this just means I will need to make another project with the border fabric. I sure don't want any beautiful fabric to go to waste. I will try to post pictures later today of the Lord's Acre donation quilt.
Posted by Suzzy at 8:47 AM No comments:

Hurray! The turning Twenty quilt I started a couple of years ago is finally completed. The queen size quilt, made for my neighbor, took a little longer than I anticipated. Sometimes "Life" gets in the way of completing projects. I used Martinuqe fabric designed by 3 Sisters for Moda including regular cotton fabric as well as the chenille and pintuck fabrics from the fabric collection. I hope my friend will be pleased with the fabric she chose for her quilt. 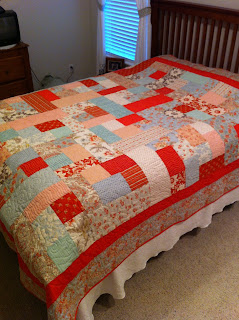 So “What is the world is a previvor?” you might say. Cancer previvors, according to www.bracnow.com glossary, “are individuals who are survivors of a predisposition to cancer but who haven’t had the disease.” Many people are aware of the BRAC genes that predispose a person to hereditary breast and ovarian cancer. There are many other genes or syndromes that can predispose you to cancer. One such syndrome is Lynch Syndrome which predisposes you to many different gastrointestinal tract cancers such as colon, rectal, gastric, hepatobillary, and pancreatic as well as endometrial, ovarian, ureter, renal pelvic, skin, prostate and some subsets of breast and brain cancer according to the LynchCancers.com website. If you have a family history of colon cancer or endometria/uterine cancer, especially at a young age, you could be at risk. I encourage you to read more about Lynch Syndrome if you have a family or personal history of any of the above cancers.

I am a previvor of colorectal and uterine cancer. I was first encouraged 11 years ago to have a colonoscopy by my family physician at the age 43 when I told him my sister who is just older than me was diagnosed with a cancer. I of course, being an oncology nurse for over five years, knew the importance of early diagnosis of colon cancer. The colonoscopy was performed and I was found to be free of polyps or cancer by a gastroenterologist who had taken my detailed family history which included three generations of colorectal and or endometrial cancer. I was told to have another colonoscopy in five years. Recommendations for colon screening for Lynch syndrome is every two years prior to the age of 50 and every year after the age of 50.

Four years later my oldest sister was diagnosed with endometrial cancer just as my mother and maternal grandmother had been in their late 40’s early 50’s. Bells went off in my head since my mother’s sister had also had a female related cancer in her 40’s. I consulted my personal gynecologist and told sure you can have a gene test to see if you have a predisposition to cancer. I was given a phone number that did not work. I subsequently changed gynecologist because he was found to be clueless about Lynch Syndrome. At about the same time, I had a skin lesion removed that was suspect for Muir Torre syndrome. Subsequently I was put in touch with a genetic specialist nurse who referred me to the chief of Gastroenterology at Baylor University Medical Center in Dallas for genetic testing. Genetic test showed I do have a gene mutation that predisposes me to Lynch Syndrome cancers. Shortly thereafter I had a hysterectomy to prevent endometrial/uterine and ovarian cancer and annual colonoscopies which led to a colon cancer scare when I was told I had colon cancer. Fortunately the polyp found at the time of my 2nd annual colonoscopy, though highly suspicious for colon cancer, was not diagnostic for cancer. Subsequently I had surgery to remove the suspicious area and have routine diagnostic procedures annually to evaluate for gastrointestinal, urinary tract and skin cancers.

I have had two skin lesions that turned out to be Muir Torre related cancerous that I probably would not have had evaluated if I had not been tested for the Lynch Syndrome gene.

I consider myself a Colorectal Cancer Previvor since the precancerous polyp was removed before it turned into a full blown cancer at the age of 49. I hope my story encourages you to evaluate your family history for the possibility of a familial cancer syndrome.

Lynch Syndrome genes are dominant genes meaning that you have a 50% chance of having the gene if one of your parents also had the gene. Remember! You are your own best medical advocate.

I apologize for being so wordy. I think it is important to know your family history. My sweet Mom died seven years ago from breast cancer. My aunt died 2 years ago after having being diagnosed with ureter cancer which is a Lynch Syndrome related cancer. My two sisters are healthy because they too get frequent followup and screening for Lynch Syndrome related cancers.
Posted by Suzzy at 9:36 AM No comments: 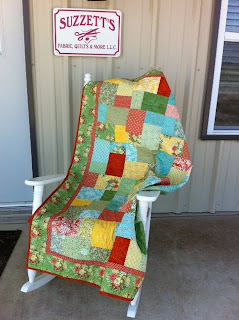 Team Hooker Silent Auction is 9/21/2012 at the Italy HS football game. Details are available on this Italy Neotribune link about the Hooker family.

Several ladies were in my shop from the local 'Our House in Milford' quilt retreat center shopping for Moda Layer Cakes recently. They told me all about the 'Double Slice Layer Cake Quilt' pattern. You can find a how to video on youtube. I watched the youtube video by the Missouri Quilt Co. At any rate, I loved the quilt pattern and knew it would be perfect for a fabric line with several different colors. When I read about the Team Hooker silent auction I knew I had to make something for this sweet lady and her family. I spotted a Flora Layer Cake in the shop and went to work Friday sewing up a fun bright "Wake you up in the morning!" quilt. The quilt measures approximately 65 by 73 inches and is quilted using random heart and squiggle doodles. The backing is a coordinating green with tiny orange flowers circle print from the fabric line.

If you are local be sure and support Team Hooker by bidding on items donated for the auction on Friday, September 21st.

Here is the picture of the quilt on the front porch rocker.

My daughter likes the lasagna strip quilt so much that she put a new twist on it. She took one of our new Simply Color Junior Jelly Rolls and made the lasagna strip quilt. This junior jelly only has 20 strips of ombre fabric so it was an odd shape. My brilliant daughter decided to cut it up into 16x16 squares. She then turned them different directions added 3 inch sashing. I think it turned out really cute and I love the colors.

My daughter wanted to make an iPad cover so she got online in search of a good pattern. In her search she found some patterns by Whistlepig Creek Productions. She could not decide so we ordered 3 different patterns. She chose the iCozy pattern to start on. She chose 2 coordinating fat quarters from the Sofie line. She was so excited when she finished because this was a fun and easy pattern to complete. I think it turned out cute.

The inside has a cute pocket and elastic corners to hold the iPad in place.

Suzzy
I am a quilter who loves fabric, sewing and creating fun home decor projects.